Because frequency control with temperature variations is directly related to quartz orientation angle control, all AT crystals produced at Colorado Crystal Corporation are accurately measured and catalogued into tight angle groups. High technology equipment and processing techniques allow CCC to accurately X-ray and/or angle correct singly rotated crystal cuts and the more difficult doubly rotated crystal cuts which include among others the SC and IT cut. Engineering modifications have been made in the double diffraction x-ray systems to obtain a much higher order of resolution, achieving a repeatability of a fraction of a minute. In addition, we utilize two different EFG x-ray systems.

Colorado Crystal Corporation’s lapping equipment was engineered to achieve the finest in crystal performance. Its custom design allows for intermediate lapping, finish lapping and the polishing of crystal surfaces… with special attention given to uniform surface finish and parallelism, two of the most important factors affecting the “Q” and other motional parameters of the crystal resonator.

For the difficult task of measuring quartz resonators, Colorado Crystal Corporation utilizes some of the latest and most sophisticated test equipment in the crystal industry. Automatic data acquisition systems are employed in several test areas to simultaneously read and record highly accurate data on the quartz resonators. This data can be exchanged with other computers or stored for future use. Colorado Crystal Corporation’s specialized test equipment can be used in many configurations and be interfaced to our computer for ultra-precise testing. For extremely accurate and reliable testing our customers can rely on our testing capabilities to meet the exacting demands of today’s technology.

*Operation of a crystal unit should be kept at the lowest ambient temperature possible. Crystal drive levels should be kept at a minimum.
*Dynamically age the crystal in its oscillator circuit, prior to final adjustments.

Many crystal manufacturers will supply values for L1, C1, Q, R1, Co, and Fs. With the proper values inserted in the illustrated formulas, the pull range (load frequency FL) can be calculated for any value of CL in series with the crystal.  An understanding of these formulas will aid in circuit design.  Precision crystals require that all referenced parameters be stated.

A crystal unit is normally intended for use only within a very narrow frequency range, centered at a specified nominal frequency.  When a crystal is used as a passive element and the frequency is swept from a lower to a higher frequency the minimum impedance from Fs (maximum transmission) to Fp (minimum transmission) will change from a very few ohms to megOhms.  Although a crystal will operate at any frequency between Fs and Fp, depending upon circuit conditions, it is desirable to operate close to the Fs frequency as frequency stability is less affected by external circuit capacity changes.

A convenient method of adjusting a crystal to a specified frequency is to connect a variable load capacitor (CL) in series with the crystal unit. The amount of pullability (frequency tuning) is controlled by the C1 and Co values of the crystal and the value and range of the CL capacitor. Series inductors may be employed to increase the pull range of crystals.

Proper selection of the type of crystal will also assure improved stability. For the same frequency and crystal cut, the mass of quartz in a 3rd overtone crystal is three times as great as that in a fundamental, while the mass of a 5th overtone is five times as great as that of a fundamental.  The increase in mass directly resulting from selection of 3rd or 5th modes of oscillation also improves stability but will decrease C1 therefore decreasing pullability. 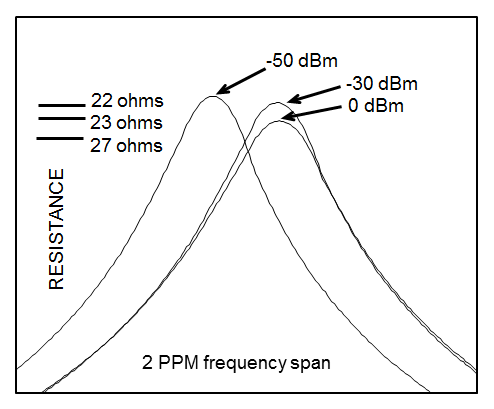 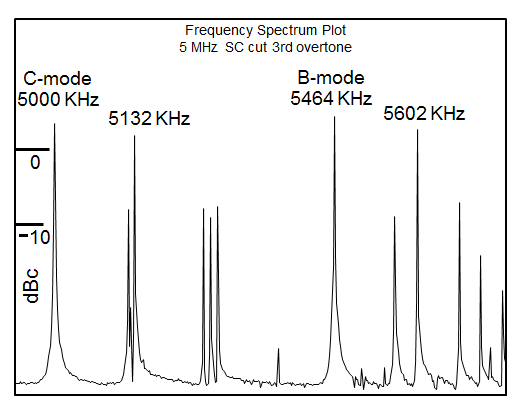 Figure 3 shows a crystal that was tested for Drive Level Dependency (DLD). In this example there were three frequency sweeps with each frequency sweep being at a different drive level. DLD can also be tested using an amplitude sweep. Within reasonable drive limits for a given design, there should not be excessive resistance or frequency shifts.

Figure 4 is a plot showing the frequency response for a particular SC cut design. Note that the B-mode frequency is about 9.6 percent above the C-mode frequency. The inharmonic overtone modes (spurious modes) are also shown for each mode.

Quartz crystals may be designed to operate over wide or narrow temperature ranges. Temperature/frequency characteristics can be altered to give optimum stabilities over any specified range. The TC (temperature coefficient) is largely controlled by proper angle orientation during X-ray measurement. TC can be expressed in many ways including plus or minus parts per million (PPM) over a given temperature range, UTP (Upper Turning Point) range, LTP (Lower Turning Point) range, Slope, delta PPM between turning points and other methods or combinations. 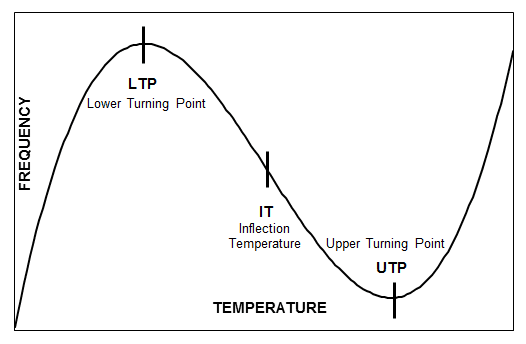 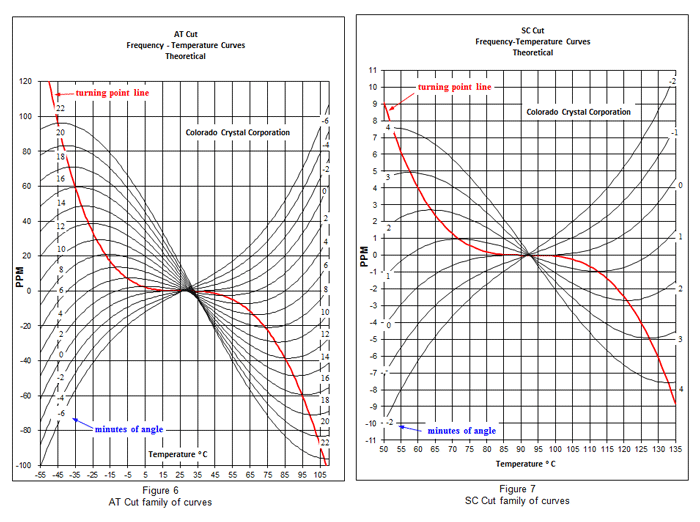 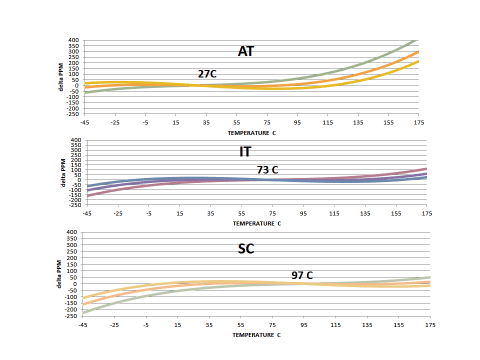 Figure 10
General family of curves for the AT, IT, and SC cuts showing the approximate Inflection Temperatures 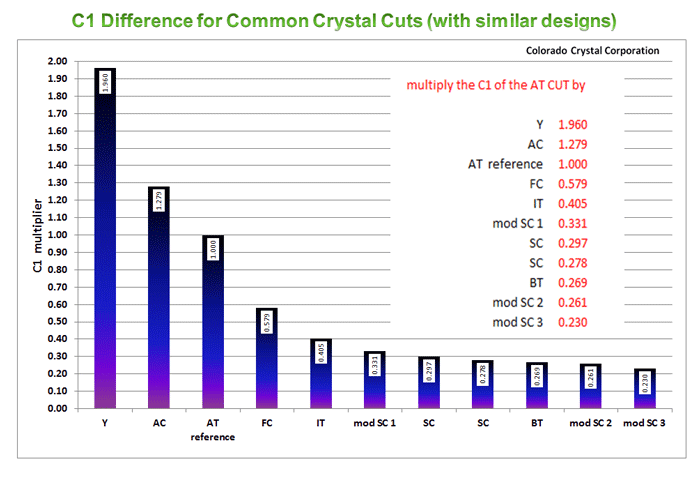 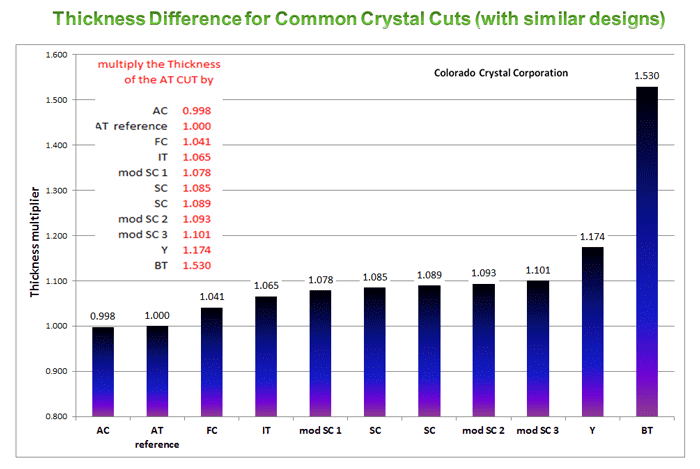 There are many applications utilizing piezoelectric quartz with more being developed all the time.

Some Common End Use Applications